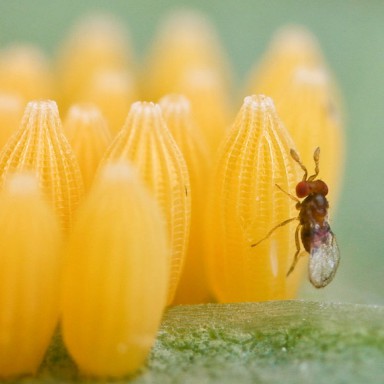 The Flight Artists team from Wageningen University, the Netherlands, has been the first to make high-speed camera footage of parasitic wasps of about 1 mm wingspan.
The team made films of the tiny flying insects at 22,000 frames per second. That is almost 900 times faster than a TV-screen can show. In the time between two TV images, the wasp has beaten its wings 14 times.
This is the first time the flight behavior of the parasitic wasp is observed, which is used as biological crop protector that kills the eggs from which harmful caterpillars grow.
It was known that parasitic wasps hitchhike on top of larger insects, such as butterflies, but until now nobody had seen how the wasps were able to fly to the butterflies and their eggs.